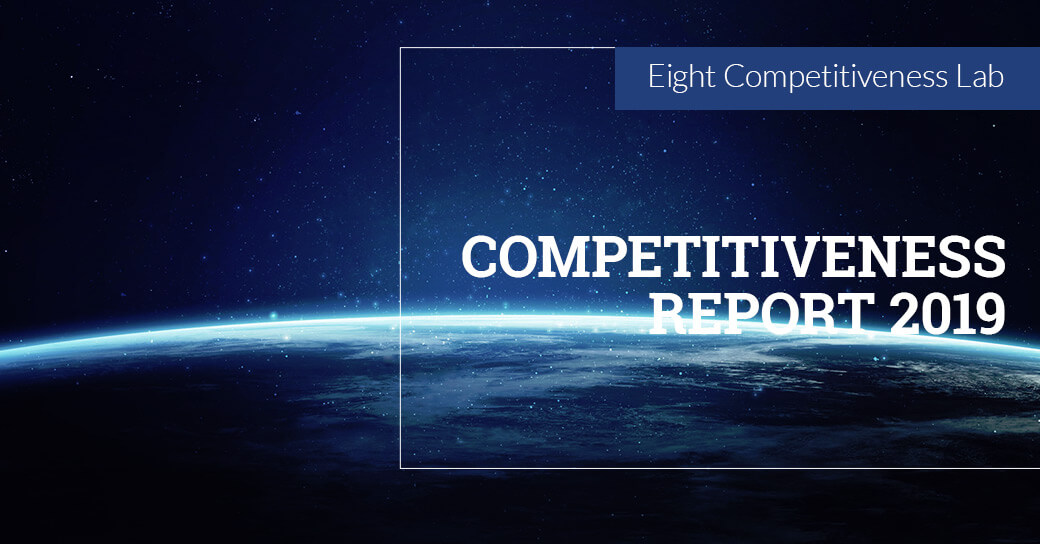 Cick on the above image to view Competitiveness Report

Despite rising global economic risks, Europe presents substantial opportunities for global investors, according to a report produced by Eight International, an organization of independent transaction advisors. The research also proves that GDP in isolation will never provide the full picture of national economic performance and that global competitiveness is a multifactor approach combining business environment, political and social stability, innovation, education and quality of life.

The report is unique in that it uses 38 indices and 25 authoritative reports to analyse the world’s economies. The report which was first published in 2013 and now in its 4th fully international edition has gained substantial traction in senior Government and policymaking circles. Its international influence is now widespread.

The 2019 Competitiveness Report contains comprehensive insight and understanding of the performance of ten countries in detail and over time. This year they comprise the European countries of France, Germany, the UK, Italy, the Netherlands, Poland, Spain and, Belgium as well as the strategically significant economies of Russia and India.

“Competitiveness should not be viewed as a dirty or vulgar word. Our study shows that a favourable business environment that encourages competition correlates strongly with a country’s economic development and the happiness of its citizens.

The more a country is open to the opportunities of trade, the better its quality of life inevitably becomes.

A society based on equal political rights, social tolerance and the values of a good education available to all will result in increased economic competitiveness. We need to trust individuals to address complexity.”

“A sense of frustration and insecurity created by trade tensions and political uncertainty has obscured the truth that regulated markets create prosperity. In this crucial moment for the global economy, policymakers must seek to cut through the political noise.

This is where Eight International has a unique advantage, with our depth of insight, global point of view and unparalleled international network.”

Highlights from the analysis of the ten countries featured include:

UK: While it’s economic foundations are strong, it’s necessary to look beyond Brexit to tackle key issues holding back the UK’s long-term competitiveness as it risks being overtaken by countries rising up the ranks in terms of overall competitiveness.

France: It has seen significant improvements in the quality of its business environment. But the unresolved issue of restrictive employment practices and a lack of internal labour mobility remain a drag on economic performance.

Germany: While it’s Europe’s leading economic power, it does not have a single company in the index of the world’s 100 most innovative companies. By comparison, the UK and India have five each. It has seen its positions drop in certain other critical international rankings.

Belgium, the Netherlands: Both countries appear to be highly competitive and offer a good alternative for investors willing to establish a presence or expand their businesses in Europe.

Italy: Despite being one of the three largest economies in the Eurozone with dynamic companies, the country’s political environment creates uncertainty among international investors who want to know how the country plans to manage its macroeconomic situation.

Poland: It’s the only EU member which has not faced a recession in the past two decades. But despite sustained economic growth, it remains a country in transition.

Russia: In spite of the recent political issues, some international investors are progressively returning to the country. Business environment rankings are improving. Investors are notably attracted by large consumer markets.

India: It’s dynamic and optimistic business culture sometimes makes it “less difficult” to navigate for the foreign investor than, for instance, mainland China. The world’s fifth largest economy is set to benefit from a demographic dividend.

Eight Advisory is a European independent consultancy based in France, UK, Belgium and Germany advising company managers, investors and banks within the context of corporate Transactions, Restructuring and Transformation globally. Its 400 employees and 48 partners offer their financial and operational expertise in support of corporate decision-making.

The company was established in 2009 by a group of Big4 partners who collectively recognised the need for a truly independent advisory firm, free from conflicts of interest. Today, Eight Advisory is one of the largest independent professional services firms in Europe.

Eight International is a global advisory organization founded by transaction advisory companies sharing the same values, including Eight Advisory. It was created in response to the growing demand of company executives, shareholders, private equity funds, banks and potential investors for dedicated operational and financial advice around transactions, restructuring and business transformation.

Cick on the above image to view Competitiveness Report
View All
Newsletter
Sign up below to receive our Latest Newsletters & Stay Up-to-date!
Website Privacy Policy - Your personal rights have the highest priority, and we make every effort to protect these rights. We do use Google services & analytics, email marketing services, social media programs, reservation systems, and banking services for any payment processing following data protection obligations. Please see our Privacy Policy for full details and your consent for use of this site..Accept